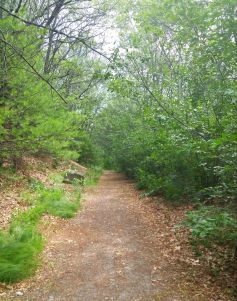 This picture is of the path at the end of the road that goes through the woods into the meadow behind the cemetery. W used to like to take it on our walks together — climbing up the steep and secret little cut through the trees at the meadow’s edge to slip into the back of the cemetery was always some kind of adventure — but once after we’d made the climb I found a tick on her leg so she refuses to have anything to do with the place now and insists we go in decently through the cemetery’s front gates.

I’ve been walking with her in the cemetery for so long — since I was pregnant with her, in fact — that it had never occurred to me she didn’t really know what a cemetery was. It was only a couple of months ago that she learned there are actual dead people buried in it, and she was thrilled. She wanted to know whether we could dig some of them up sometime to look at them.

Writing things: I have two days to report on, I didn’t update yesterday and promised I’d include it, so — the news is that on the one hand things are gelling really well and I’ve produced a few thousand words all told in the last couple of days. On the other hand, I am in serious doubt now of this Readercon deadline. I do think I have an honest shot at the end of July, but I’m still going to aim at Readercon just to keep myself hurtling forward.

My disorganized brain makes such a massive undertaking (note that this book is intended to be the first of three, so there’s a lot of road down this road) hard to hold onto all at once. At this point I’ve sprawled across four Scrivener projects (they are called Ash working draft.scriv, Ash beta draft.scriv, Ash Ordinary.scriv and Ash notes.scriv, and if you can guess which is the actual and current manuscript I will give you a sticker), an assortment of unhelpfully-titled Google docs, the several Evernote text jottings I’ve made on my phone when awakened in the night by an idea, and various pages of various notebooks. (I keep finding notebooks squirreled away in my office or bedroom, and within those notebooks, random flurries of book-notes.) Members of my writingfriends Slack suggested using a wiki for a story bible, and I begin to think I’m going to have to do just that or at this rate I’ll inadvertently change the protagonists’ names between books or something.

Daily things: Speaking of unhelpfully forgetting things! I need to renew my passport! So that I can go to Finland! In August! Which is soon! I also need to fill out W’s application to the Montessori school, which I told the head teacher I’d probably get to her today, and then absolutely did not! Also I just remembered that I have some towels in the washer which I need to move to the dryer, which may sound like an ordinary enough problem except that these same towels have been in the washer for the last three days and every day I have remembered, and washed them again (because eugh, mildewy smell), and then forgetfully abandoned them again.

On the bright side, I caught a Pikachu this morning and when I picked W up from day camp and told her she was so ecstatically delighted she laughed half the way home. So, I mean, achievement unlocked.

I really should go see about those towels.

2 thoughts on “Farther Down the Path, No Nearer Its End”