My writing teacup lives on my desk. Not because I drink tea from it while I’m writing — not often, anyway, I’m usually facedown in a bucket of coffee — but because it’s a sort of story-talisman, I suppose? When I saw it for sale I thought, That is exactly the sort of teacup Farin would have, and so I bought it. It is a concrete Farin Thing that lives in my world.

Farin is the sixtysomething widow who runs the tea house in Nishar. My alpha reader calls her Tea Grandma and summed her up in a comment thusly: 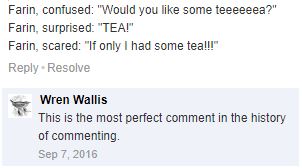 You will meet her first of anyone in the book (well, if you’ve read “After Burning,” you’ve already met Vulo — the Wolf — but Farin is the first book-POV you meet in the book), and I love her to bits, but she’s also been a character I’ve struggled with and for a while I was tangled in the question of whether or not I should excise her entirely. But after I spent this last miserable weekend running stupidly into walls, I managed to break through a wall, and what was waiting on the other side of it was the Answer to Farin.

When I hit a story-wall or get tangled in a story-problem, I tend to want to stare at it, sweating blood, until I solve it or die trying. But I’ve also found (often enough that I really should know it by now) that solutions will almost always come to me when I walk away from the story and let my brain wander around something else for a while — a book, a TV show, a video game.

So we’ve entered the foothills of Readercon and I will definitely not have this draft finished by then, but — I’m going to WorldCon in Helsinki next month, and I do think I can have it ready and readable by then.

Writing things: Morning pages, yesterday and today, check and check. No new or side projects, all focus is on the novel, but that’s flowing again at least (for a given definition of the word flowing).

Life things: I will send in my passport renewal forms tomorrow, I will, I will. Making butter chicken in the slow cooker for dinner tonight; last night was a homemade pizza night (broccoli and béchamel; caramelized onions and thyme). Many walks have been had.

Reading: Just embarked on A Darker Shade of Magic.