It’s nowhere near the actual year’s end. But it’s beginning to look a lot like for-your-consideration season, and since I only have two things this year for your consideration and don’t anticipate having more, I will just go ahead and round up all both of them right now.

My short story “Jack Among Wolves” appeared in the (incredibly fun) Aetherwatch anthology Skies of Wonder, Skies of Danger.

It could not be said that Captain Jack Valiant objected to illicit custom; what she did object to, strenuously, was being entered into such an arrangement without her foreknowledge and consent.

“It is my most ardent desire,” the Captain said sotto voce to the great blond bear of a man at her shoulder, “that the portmaster should fling himself into the God-damned sea.”

“He would have to go some way,” her Chief Mate observed. “Better to desire he fling himself into the river, no?”

“Desire knows neither reason nor geography, Mr. Kuznetsov.” The Captain stepped forward to address the trio waiting amongst their baggage on the gangway. “I am sorry; you could have the sigil of Black Bess herself and I’d still tell you to sod off. The Blackbird is a cargo vessel, neither obliged nor licensed to ferry passengers anywhere, much less to the bloody Sebiran border. As Mr. Hewlett damned well knows.”

And “Ghosts of Bari,” my second published story from the KinVerse, had the bittersweet honor of being the final story in the final-ever issue of Shimmer.

Salvage is the only long-term game in the universe.

No tyrant of the star-nets or titan of trade ever admired a salvage crew; we’re the crows on their trash-heaps, the rats in their walls. But I don’t think any of them’s ever considered, either, that when their names have long gone airless and their works are rust and shadow, it’s junkers who write their elegies.

Every empire ever raised eventually falls. And sooner or later, the crows always come for the corpses.

Neither of these stories is currently available free online, but if you are a SFWA or current WorldCon member and have any interest in considering either one for a nomination, drop me a line and I can send you PDFs of either or both.

“After Burning” is out today, friends, available for free at Beneath Ceaseless Skies. (If you like it, though, and stories like it, may I recommend a BCS subscription? Scott Andrews is a tremendous editor, and I’ve discovered many of my own favorite writers through the magazine.)

If you enjoy the story (I hope you enjoy it!), then you might be interested to know that it is directly connected with my WIP novel, Ash and Ordinary. The short story, set in a border settlement of the theocratic Marethi Ordinary, takes place about six months before the opening of the novel. The novel’s primary POV character is none other than the Wolf himself, but he is surrounded by a trio of badass ladies.

Grandmother and widow Farin Lais only wants the quiet retirement of running a village tea house; wasteland scavenger and river-pilot Esmat Ahuja is trying to smuggle a man home from a war zone. And the Wolf’s new and dubiously-loyal undead comrade, Sirin, is keeping secrets that may spell the end of the Ordinary itself — or its salvation. When the four of them collide, the Wolf — still coming to terms with his own crippling injury and trauma — will have to decide whether saving the empire he serves from the traitors in its shadow requires him to betray it first.

The story is rooted in the legend of Prester John, but also contains elements of Joan of Arc, the Tunguska event, Cossacks, various medieval heresies, and zombies.

Spring is drizzling all around us once again. 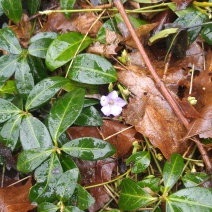 I haven’t posted anything since January — January! — and here we are four months into the year so I guess we all know how I did with my resolution to blog more often. Ha ha. Ha. I am happy to report, however, that I’ve managed to keep up fairly well with my determination to read a book a week, and I do indeed have a second novel-thing sketched out (werewolves, my friends), and I did get those two stories submitted.

I’ve also sold one of those two stories, I’m even happier to report: “After Burning” will be appearing in Beneath Ceaseless Skies. It is a story set in the Marethi Ordinary, the world of my novel, and if you’re curious about the novel, I can tell you that the story is a direct prologue of sorts, and the novel’s protagonist and chief POV character puts in a significant appearance.

I’m really delighted to work with the estimable Scott Andrews again, and BCS will always be my secret favorite (shh, don’t tell anyone) because they were my first-ever pro sale — of the first-ever Marethi story, no less.

Other near-future happenings in these parts will include pea-planting and archery. My husband and I are also each trying to make the other one talk us into getting a little flock of laying hens, while both pretending to be the reluctant party. We will see whether both or neither of us wins.

I feel like I’ve attained some kind of Platinum Elite level of procrastination.

Viable Paradise was … I do not think transformative is too strong a word. It was a transformative experience. I have returned from across the water exhausted and nourished and abuzz with the wisdom of the hive and also some shockingly bawdy filk lyrics. I have got a tribe and I love them all and can’t wait to see their names on bookshelves and magazine covers and award lists in years to come. The instructors are geniuses and the staff are giants and everyone is 102% sweeter and more excellent than they have any right or reason to be. Also I will be dreaming of Mac‘s curry for seasons to come.

I’m still in a sort of liminal brainspace between the island and ordinary life so that’s all I’ve got to say for now, but if you’re considering applying to VP in future, I recommend it absolutely and would be happy to talk to you about it.

Coming out of the experience, though, what I know is this novel is as strong as I’d hoped, and now I know how to make it even stronger and can set about doing so. My goal is to have a completed draft of Ash and Ordinary by the end of the year. My secondary goal is to sand and polish the story I wrote at the workshop (currently and cunningly titled, “Shit, I Forgot to Think of a Title”) and send it out into the world. And and and — I have a hundred other goals and ideas but those are the two I will aim at for now.

Tonight I’m going to unpack and eat some sushi and drink some wine and make some lists. Tomorrow is Day 1 of Life After VP.

My Lackington’s story On the Occasion of the Treaty of the Thousand Rivers, A Visit to the Gallery, is now available to read free (along with the rest of the Governments issue!)  I promise the story itself is not much longer than that title.

Readercon this week! Will you be there?

Friends, I am so bad at this whole blogging-regularly business. You may have noticed. I’m going to throw a whole bunch of updatey things at you at once, okay? Get ready to duck:

Yes! I think that is all! Hurray! Carry on.

Alex wrote up my No Shit! story today on their blog, and mentioned asking whether there were other Esmat stories. Which there are. (Including a goddamned novel-in-progress.) In honor of the occasion and for anyone else who is curious, here’s a brief introduction to the universe of those stories, which I call the KinVerse.

A former riverboat smuggler, a war criminal, and an extraterrestrial machine intelligence walk into a bar.

In a parallel universe.

They’re a family, of sorts: the riverboat smuggler is the estranged older sister of the war criminal, who is married, after a fashion, to the machine intelligence. (To be fair, he didn’t know she was AI when he fell in love with her. He thought she was a zombie.) Mostly they just want to get home to their original universe, assuming there’s a home to get to; their world was coming down with a touch of apocalypse the last time they saw it. But while they’re working on that, they may as well put their skills to use, right?

And so together, they fight crime.

Well, sometimes they do both.

Friends, the time for action has come.

And by that I mean the No Shit, There I Was anthology is available to back on Kickstarter, obviously.

For a mere five dollars, twenty-four tales of science fiction, fantasy, and horror can be yours! For more-than-a-mere-five-dollars, you can access rewards like short story critiques from E. Catherine Tobler or Sunil Patel! Tuckerization in stories by Rachael Acks or me! And you will feel the saintly glow of having supported independent creators!*

I’m not saying that you should back this book just because I have a story in it, but I mean I definitely do have a story in it. And it’s a fun story! You should read it! You can read it, for anywhere from $5 to $250! Tell your friends!

And right on the heels of yesterday’s post, I’ve sold another short story. This one should be out in May. Happy Valentine’s weekend, friends!